About the LASD Band

The LASD Band is an all-volunteer group of musicians dedicated to giving their very best for the band, the Sheriff’s Department, and the community. Under the direction of Dan Glass, the band members work hard, rehearse hard and, of course, have lots of fun.

The band is supported by Californians Organized for Police Support (COPS), a 501(c)(3) charitable foundation. Founder and president Harvey Friedman established COPS in 1994 in order to provide the funds needed to operate the band.

In addition to the concert band, the LASD Swing Band and the LASD Jazz Combo entertain audiences throughout Southern California.

The present group of musicians traces it’s history to 1914, when it was first established as the L.A. Police Band. It was originally comprised entirely of sworn officers and played for police graduations, civic functions and Los Angeles-area schools. Following the passage of Proposition 13 in 1978, active police officers were required to dedicate their duty hours exclusively to enforcement, and, in response, the band was disbanded.

Shortly after, a group of civic leaders headed by Bob Ahmanson and Gene Rodenberry formed an all-volunteer band under the direction of John Campbell. Throughout the 1980s the band expanded into the 75-member ensemble it is today. Many of its members are professional musicians who play regularly in local symphonies, radio and television programs, movie studios and prominent “big bands”, as well as retired law enforcement, judicial, and fire department employees.

In 1989, Don Holcomb was appointed band director. Under Dr. Holcomb’s leadership, the band performed for countless police, fire, military and civic events. The band’s role as musical ambassador has taken it to Mexico, Sweden, Italy, Washington D.C., Ohio and Sacramento. The band has played for events such as the dedication ceremony of the California State Police Memorial and the dedication ceremony of the National Police Memorial in Washington, DC.

Following Dr. Holcomb’s passing in 2016, amid some disagreement over the future course of the band, an overwhelming majority of the members voted in favor of transitioning to the Los Angeles County Sheriff’s Department. LASD has it’s own rich history of official music, which the LASD Band is now excited to be a part of.

Under the umbrella of COPS and the baton of Dan Glass, the band continues to flourish as it represents the County of Los Angeles and the Sheriff’s Department wherever it is needed, helping to build and improve relations between law enforcement and the public at large. 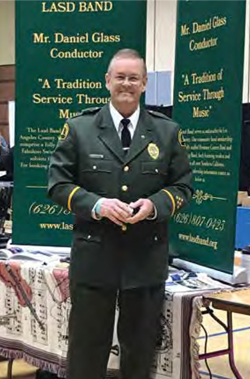 Originally from West Covina, Dan was a state champion drum major at Covina High School. Dan also studied trombone and eventually attended Cal State Long Beach, majoring in music. He participated in a variety of college bands, traveled to Europe with the American Youth Symphony and was a contract musician at Disneyland and Knott’s Berry Farm theme parks, where he subbed in the Harry James Big Band.

But Dan caught the law enforcement bug and changed his major to criminal justice, ultimately joining the El Monte Police Department. The combination of music and law enforcement has made Dan a natural fit to be our leader.